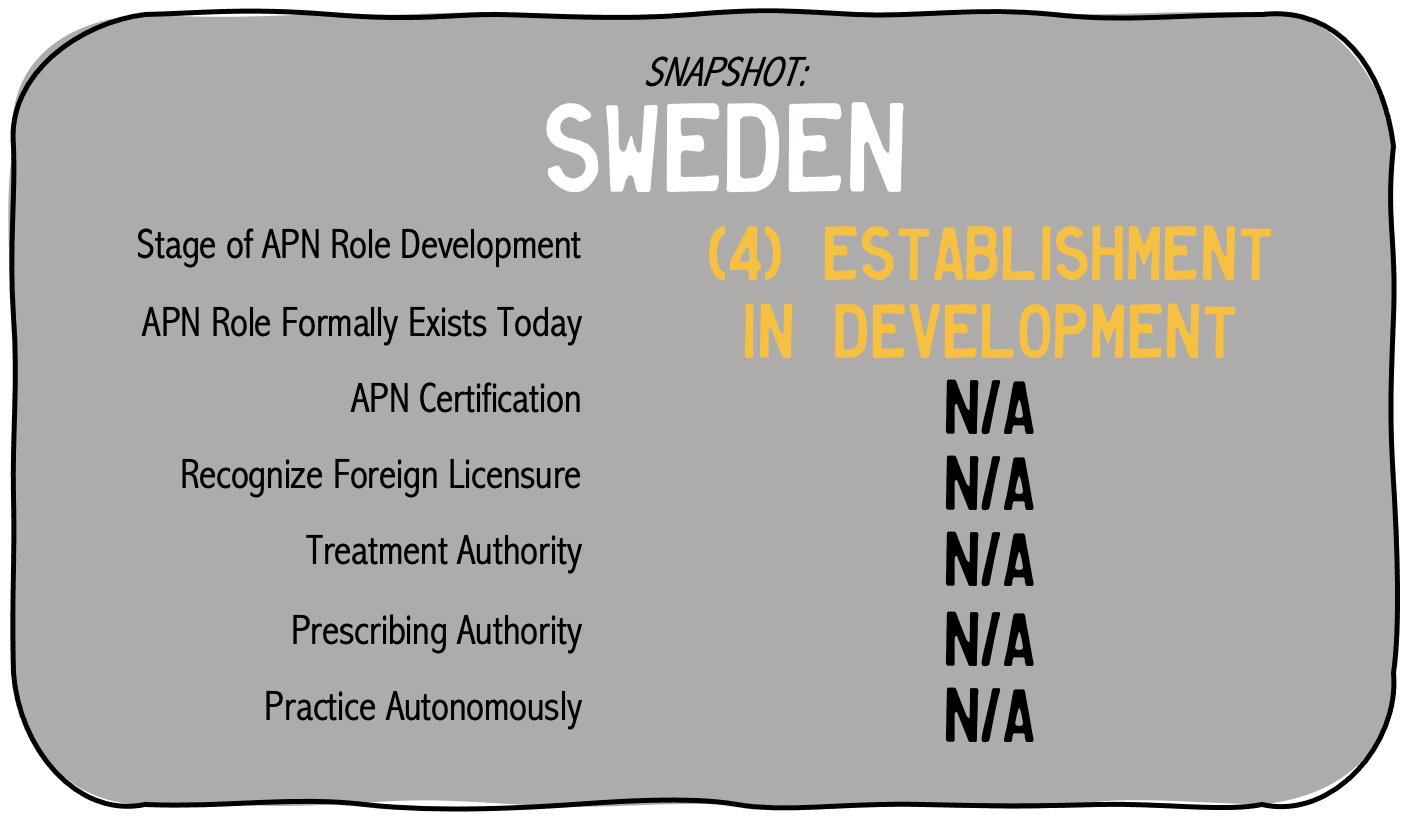 The role of Advanced Practice Nursing in Sweden has been explored for more than a decade, but the role is still in its infancy. The role has been in development, but not formally established (Bergström, & Lindh, 2018).

The role of APNs in Sweden has been under evaluation and experimentation in general practice (primary health care) and has been based on an institutional-specific model allowing varying levels of scope of practice (Lindblad et al, 2010).  Because of the lack of APN role identification, the role is currently under development to be of the greatest benefit to the Swedish health care system (Lindblad et al., 2010).  Further, there is reported ongoing interest in the Swedish health care system for more Nurse Specialists (Vårdförbundet, 2013; Vårdförbundet 2019).

The nurse to physician ratio in Sweden reportedly was 2.7 to one which reportedly is just under the average among European countries, but unfortunately has the lowest number per 1,000 population at 11.1 (Alenius, Lindqvist, and Tishelman, 2019).  Additionally, there has been a large gap in licensed physicians, largely reflected in the majority (59%) of current physicians being educated in another country (Alenius, Lindqvist, and Tishelman, 2019).  While there is a gap in physician shortage, which facilitates the advancement of nursing practice, assumedly the lack of registered nurses in the country also impedes the progress due to the lack of nursing supply to advance.

In Sweden to help the ongoing needs of the overall population, nurses have been given the prescribing authority since 1994, allowing registered nurses limited prescriptive authority for initial treatment of various acute concerns as urinary tract infections, throat infections (HAI Europe, 2012; Maier, 2019).

Various specializations at this time are offered and identified by Vårdförbundet (2019) as:

While there are various programs of specialization that are offered, the major limitation to the role is the lack of legal formal establishment of the role.  As a result the utilization of each role is often limited to the organization’s preference and policies.

Have information to add to this page?